Hongkong does not really have a lot of must-see sights – probably because it’s a very young city: only really started with possession by the British in the late 19th century, grew after the communist victory in the 1940s, and boomed with China’s return to the world stage of capitalism in the eighties.

Fun fact: The reason why Hongkong was handed back to China in 1997 was that most of the teritory had not been ceded to Britain, but “leased for 99 years” – which back then was probably considered the same as ceded in all practical terms – who would have thought in 1898 that the duration of the “lease” would actually matter?

Even today, Honkongers seem very pointedly to define themselves as not part of mainland China, in lots of little things like e.g. Whatsapp being the messenger of choice rather than WeChat, or major things like using traditional chinese characters rather than the simplified ones introduced by the communists.

But the really impressive skyscraper panorama is quite a sight, especially at night and seen from Kowloon (the other side of the harbor to Honkong island). 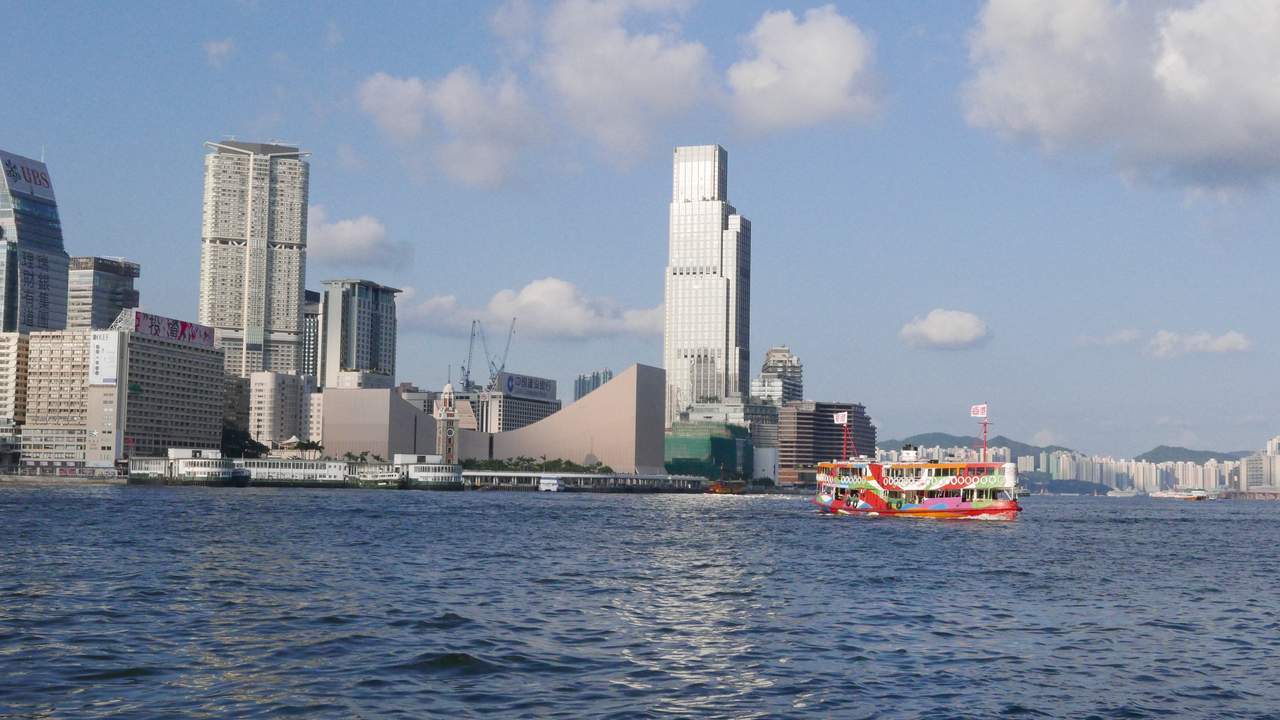 The other side of the harbor, seen from a so-called “star ferry” (like the one in the picture”) criss-crossing the harbor for a fee of exactly 2.7 HK dollars (abotu 30 eurocents – and yes, they do have special prices for seniors and children). One of those things every says is a must-do in hongkong, but honestly quite boring – you get much better skyline views from the Tsim Sha Tsui promenade on the kowloon side, and for actually crossing the harbor the subway is much faster.

And since lighting all the skyscrapers up statically is not enough, the whole skyline is combined each night for a gigantic light-and-sound show. Totally cheesy, and totally cool.

Again a case where a video is needed to do it justice, and already plentiful on youtube, like this one:

And yes, they do have red-sailed chinese-style boats sailing in front of the skyline just to look pretty – though those are of course tourist boats. 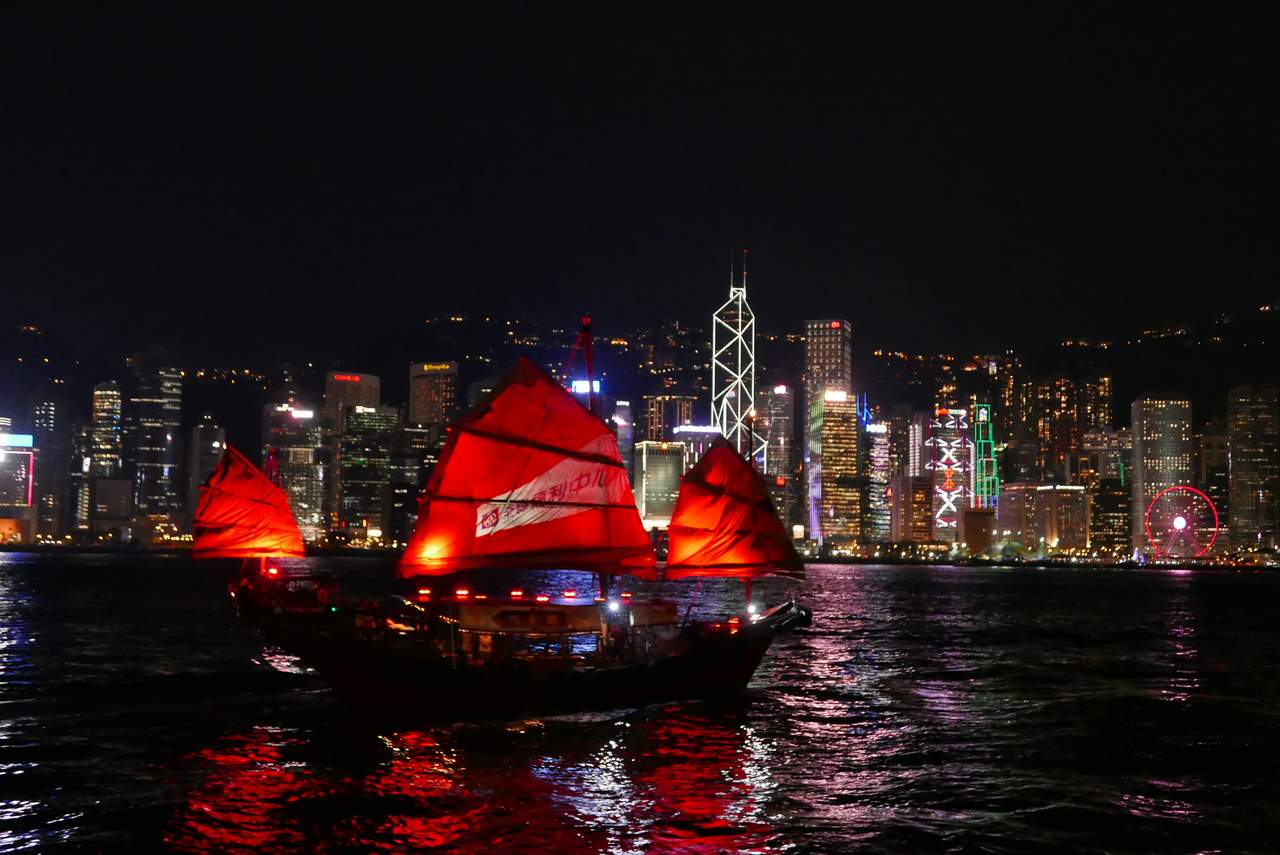 Your correspondent getting hungry – so off to the market areas for some food. 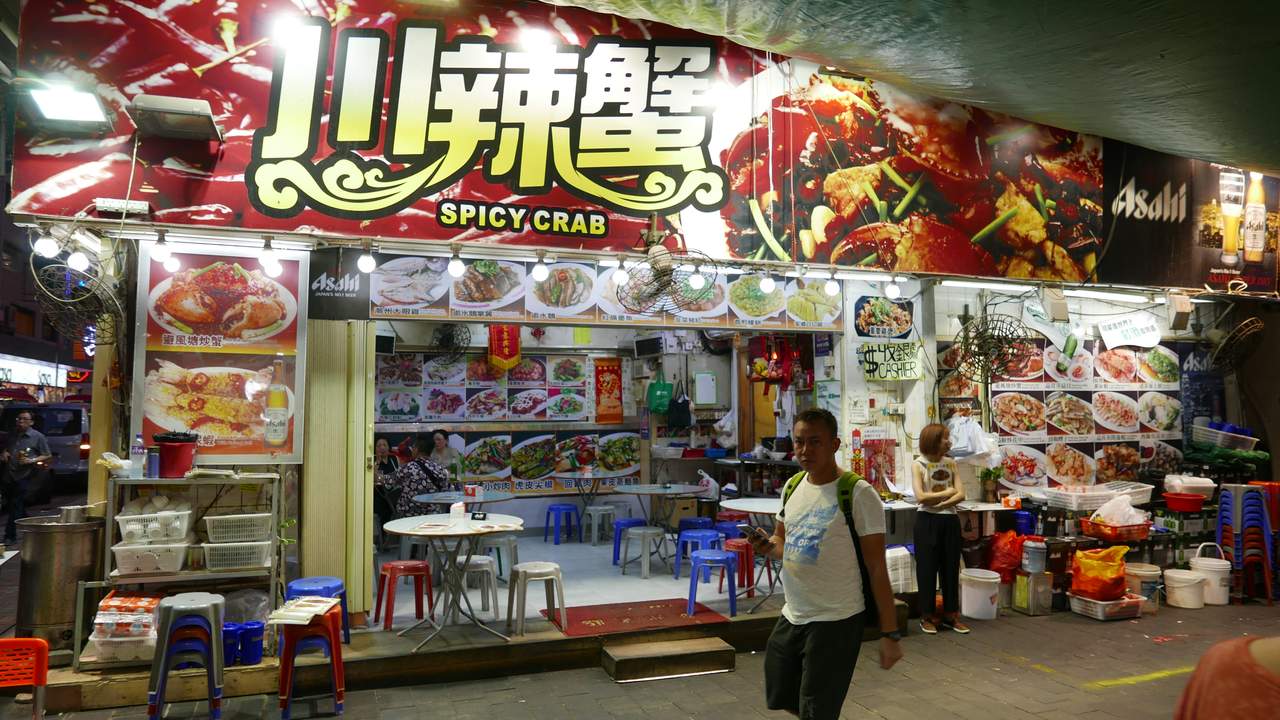 Most of which is, again, quite literally foreign.

With a heavy emphasis on all kinds of seafood, and especially very fresh seafood. Yes, these buckets are in front of a restaurant, and very much intended for you to pick out your dinner. Which, this time, I was not adventurous enough to do.

Snack stand? Looks good. And seems to be popular, so let’s try those meat-on-a-stick things they have.

The verdict: Chewy, not much inherent flavor, but not bad with a bit of soy sauce. No idea what it IS, though. 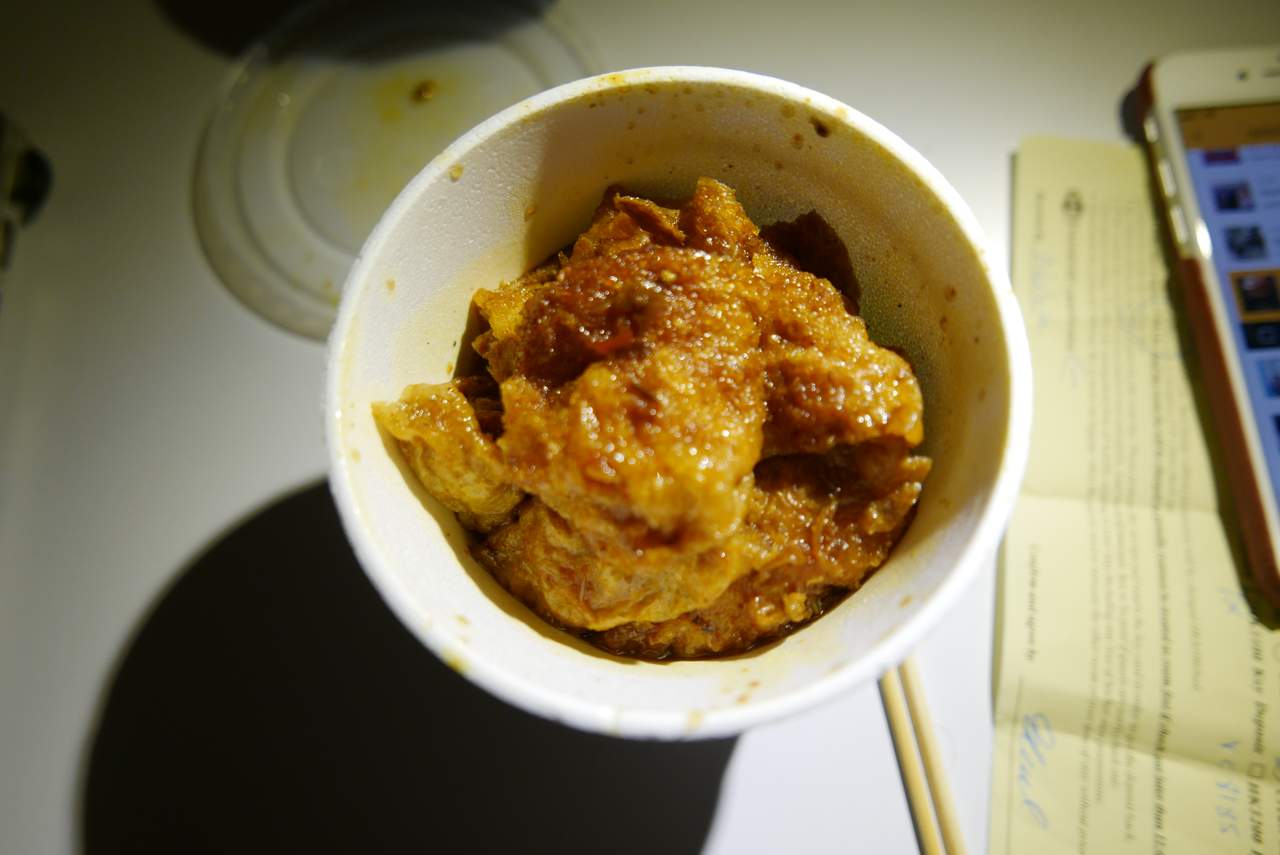 This was also originally fried on a stick, and then sold with some VERY spicy broth. Crispy, chewy, some kind of pork rinds maybe?

For desert, let’s pamper ourselves with something familiar: McDonald’s ice cream. Which happens to be purple and sweet-potato-flavored. Not my favorite.

And a local supermarket amusingly had a special section for Japanese snacks – i.e. exactly the things I had found in supermarkets in my previous temprorary “homeland”.

Found at the night market, among a milion other designs for Tshirts: A design for “github commits”…huh? So coding is cool and brag-worthy now?

Another hongkong cliche busted: It is NOT full of people selling rip-offs of expensive handbags and watches any more. Although if you do take more than 5 seconds to look at the genuine own-label watches on display, someone will inevitably whisper “copy watch?” in your ear, and a pushy salesguy will try to get you to come into a seedy-looking back lot.

On the main streets: LOTS of huge, bright billboards – and of course those are all high-res video screens.

And sometimes a curious mix of the brigh-and-shiny with the grimy-and-rundown.