Apologies if the rest of the Japan writeup becomes a more or less random mix of impressions – it’s been a while (currently in Orlando, two countries and three cities further in my travels), just did not get around to blogging.

When I started out, I was afraid I would be bored in the evenings, since while I do plenty of stuff by myself, going out alone is not my thing. But when you travel at a break-neck pace of changing countries every few days, a fair bit of time is spent on the mechanics of travel, everything from checking in to flights, to figuring out transportation, reading about interesting things in the next city coming up, or simply doing laundry or mailing things home. Or sometimes you just need to relax, take a nap, and surf the internet for a bit for something familiar when the adventure-o-meter has hit another peak.

Above: another inexplicable Japanese thing found in a random backyard. The flags look somewhat religous – but why would they be in a parking lot? 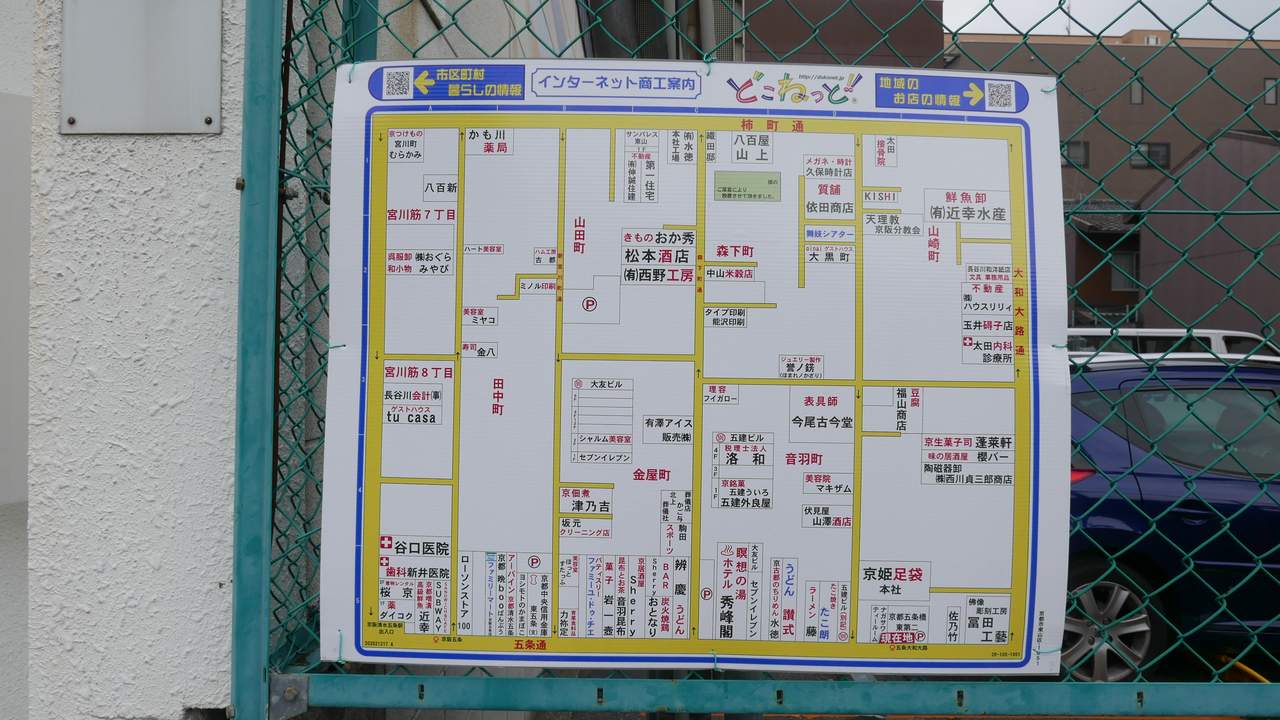 A “helpful” map of the neigborhood.

Even McDonald’s manages to be incomprehensible. 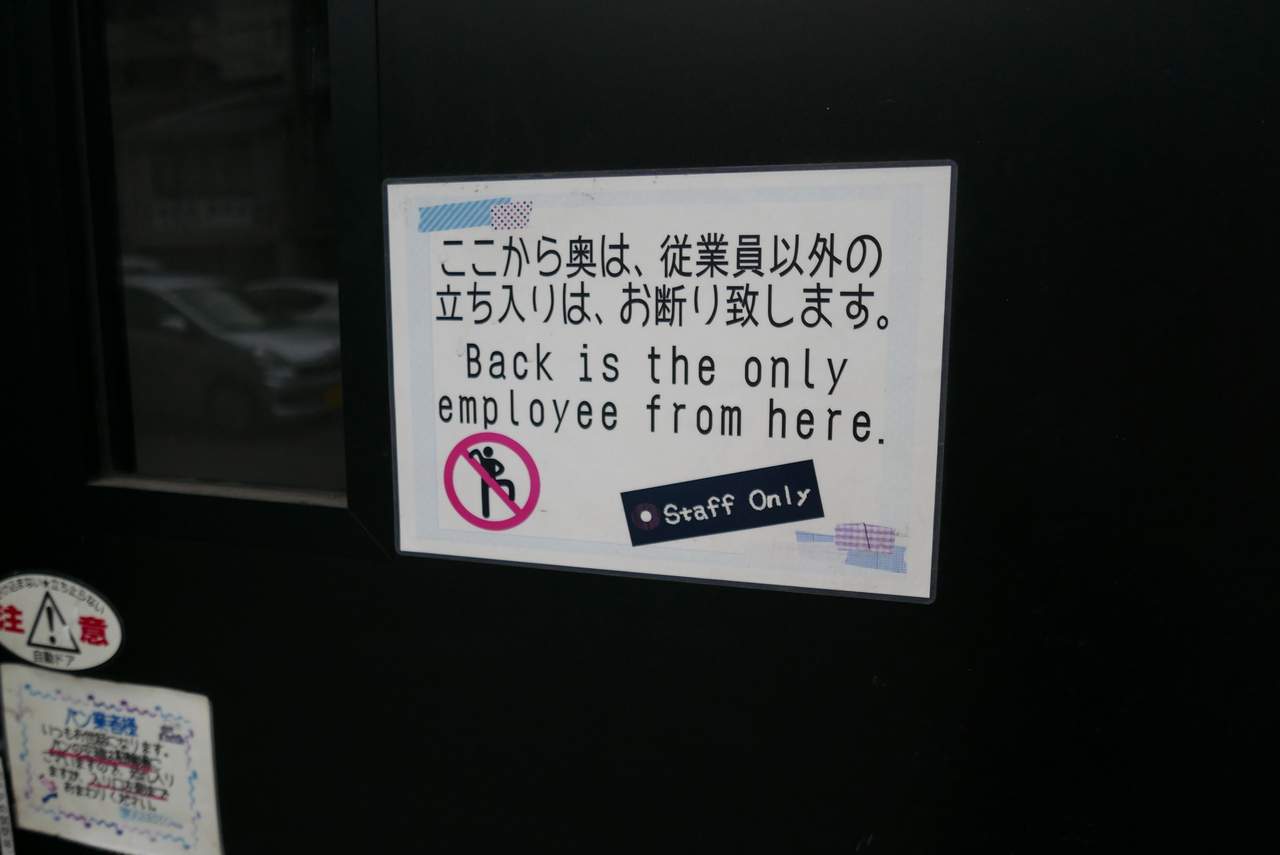 Hilarious examples of “Engrish” (i.e. badly mistranslated English) are everywhere. Probably should not make fun of it, since I’m glad for every bit of English to be found. Still funny, though. 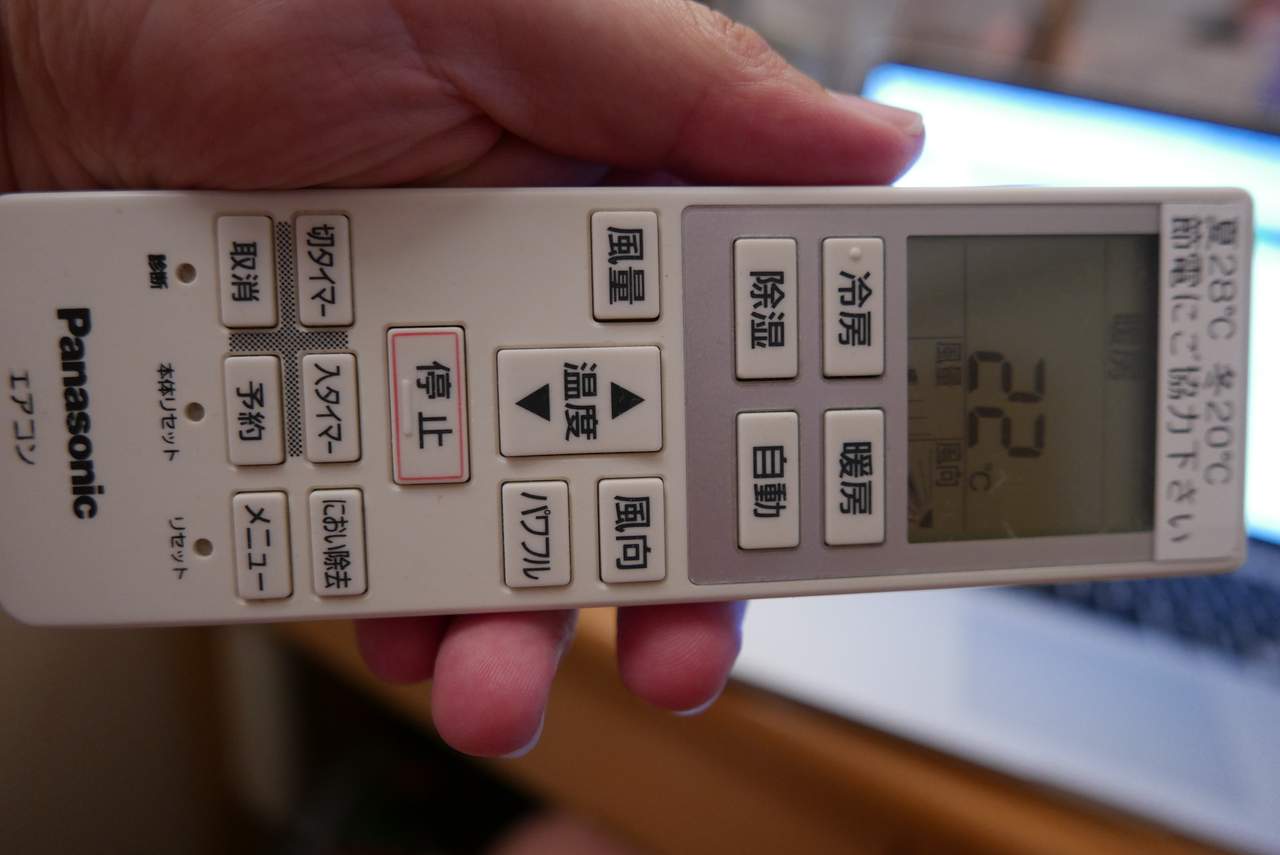 In the hotel – the guesthouse was fully booked for the last two days of my stay, so had to change to a Toyoko Inn – a generic efficiency hotel for businesspeople, sort of like the Japanese Motel One. Pro: My own room, and a much softer bed (maybe my hipbones are too hard or something, but I could feel the floor through the futon-style mattress-on-the-floor in the guesthouse). Con: When Japanese say “space-efficient”, they mean it – like the tiniest pseudo-wardrobe I’ve ever seen, about 20cm wide, in the space between the foot of the bed and the wall.

But it has A/C – let me just grab the remote for the A/C and adjust it – well,shit…. 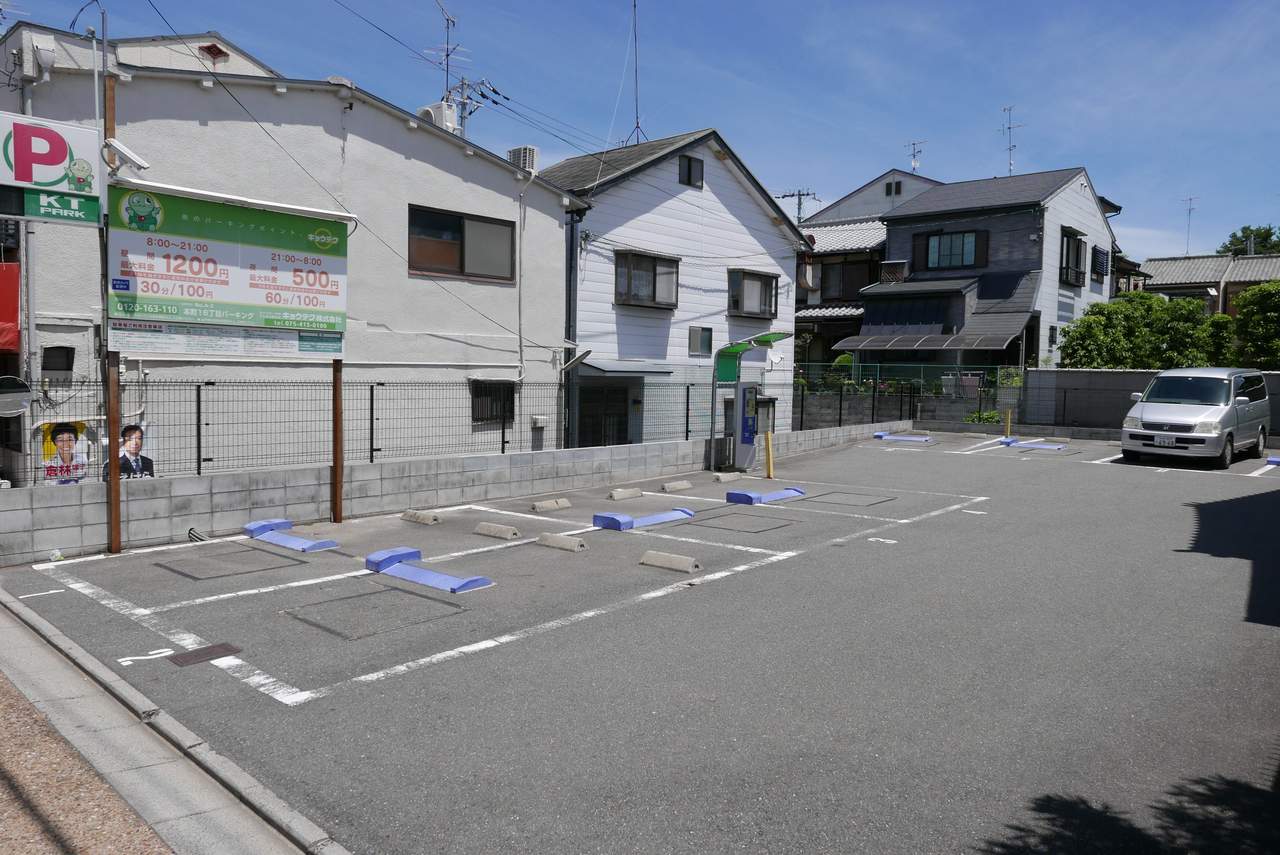 These little neighbourhood car parks are everywhere – because streets in the old parts of Kyoto are narrow, there is usually no street parking at all, giving enough space for pedestrians and bike lanes. Munich, please copy!

Speaking of cars and space, these are “Kei cars” – a special class of car that gets tax benefits in return for being limited in engine size and especially length, leading to lots of very boxy, but somehow cute, models never seen outside of Japan.

Signs at a restaurant – “English menu” and “credit card” are pretty much codewords for “foreigners welcome”. Small, mom-and-pop run neighborhood bars or restaurants are pretty much hit or miss – sometimes when you enter a restaurant, they will immediately make hand gestures shooiing you out again as soon as they see you’re a foreigner. Which is not racist, more like “there’s no way we could have a successful interaction, so please do not even try”. I have never been to another country where people are so unprepared to deal with foreigners – both due to the rather insular and peculiar culture, but also simply due to a lack of language skills.

On the other hand, I have also never been to another country where people are so extremely determined to be polite, helpful and go out of their way to make it work. When they see you, you can almost see a thought bubble above their head saying “oh shit, a foreigner – WTF am I going to do now?!?” – sometimes leading to the above mentioned immediate rejection, but mostly then leading to trying their very best to be accomodating. Like the lady above in a little restaurant in my gust house’s neighbourhood. The fact that she spoke no English at all did not prevent me from enjoying some excellent Ramen noodle soup.

A list of rules how to behave – don’t remember any more where, did not understand them anyway. Another funny term I heard: “Gaijin smash” – an action done by a foreigner (gaijin) that is so far outside Japanese social norms that they do not know how to deal with it, so you get away with it. Which, if you’re kind of an ass, can be exploited, but that I probably also caused a couple of times without even realizing it.

Also great: Restaurants, or more often food stalls, where you order at a kiosk at the entrance – find a list of meals on a poster, note the number, buy a ticket for that number at the machine, and hand the ticket to the waiter.

Just a regular supermarket shelf – can’t even do justice to the real thing, where everything is very, very bright, colorful and visually loud – quite a contrast to the restrained style of Japanese art. Japanese supermarkets have LOTS of weird things (when in doubt, it probaly contains green tea, red beans or seaweed), and very few English labels – I almost took a bath in toilet cleaner… 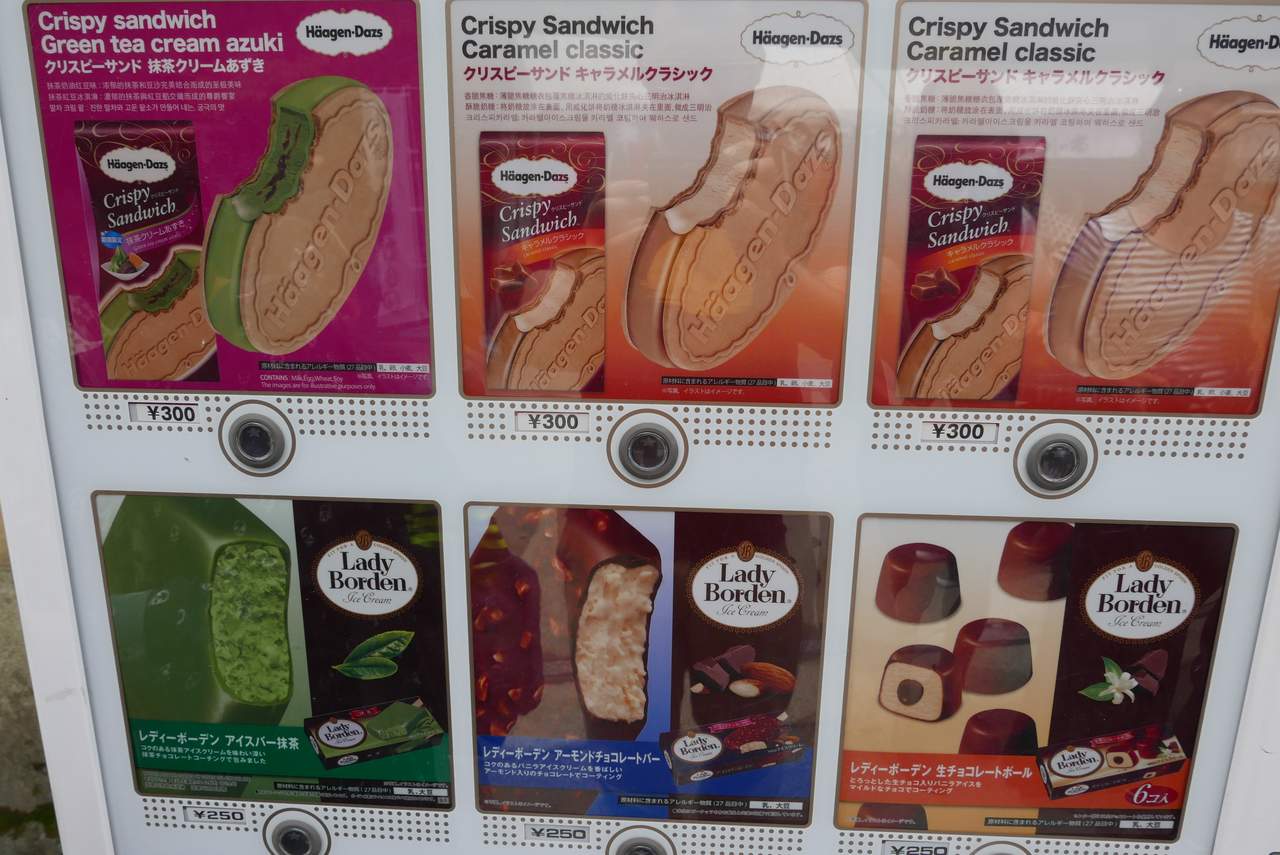 Yup, even Hagen-Dasz does ice cream with green tea and azuku beans. Not my favorite. 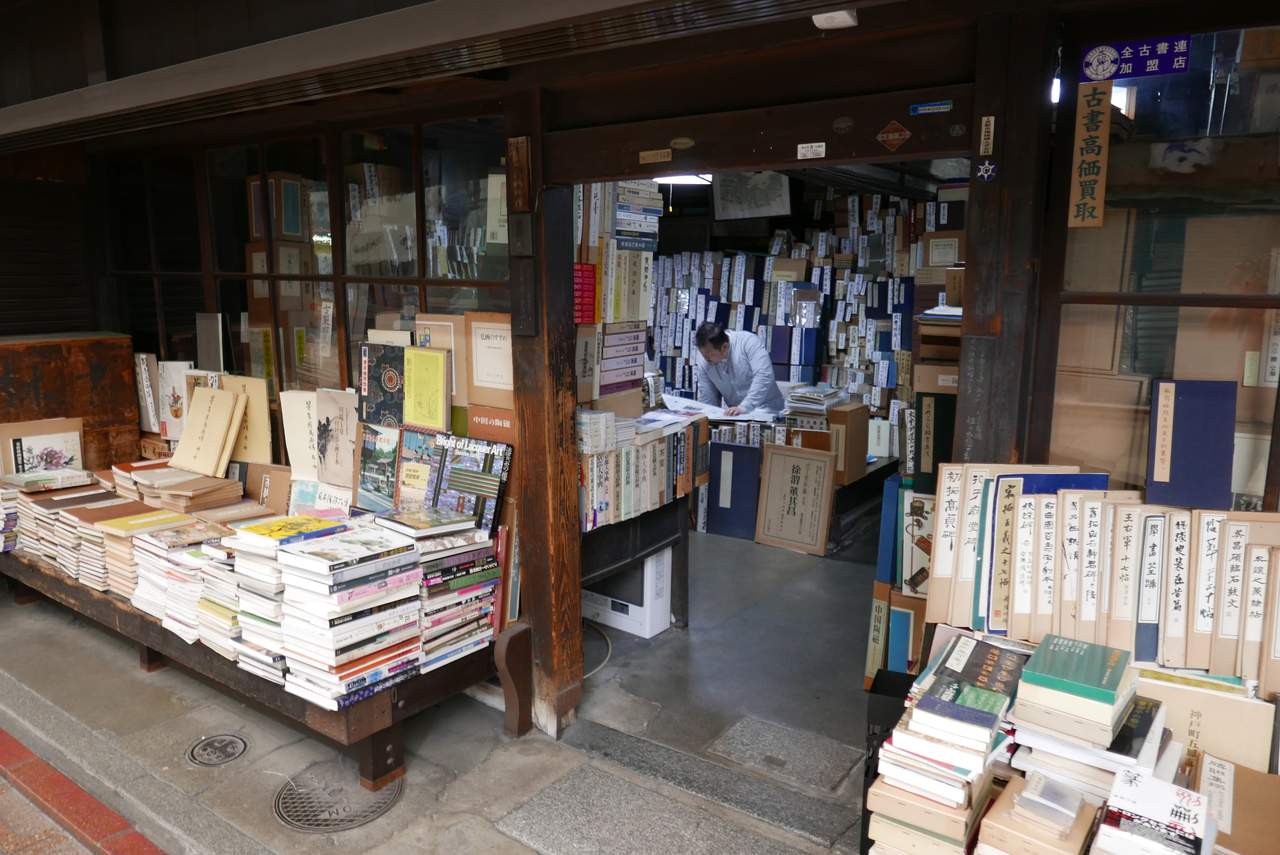 A wonderful antique bookstore in the market area downtown. Though sad to be walking by a beautiful bookstore that is totally lost to me due to the language barrier.

Speaking of restrained art: This is the entrance ticket to a temple – probably the prettiest ticket I’ve ever gotten. 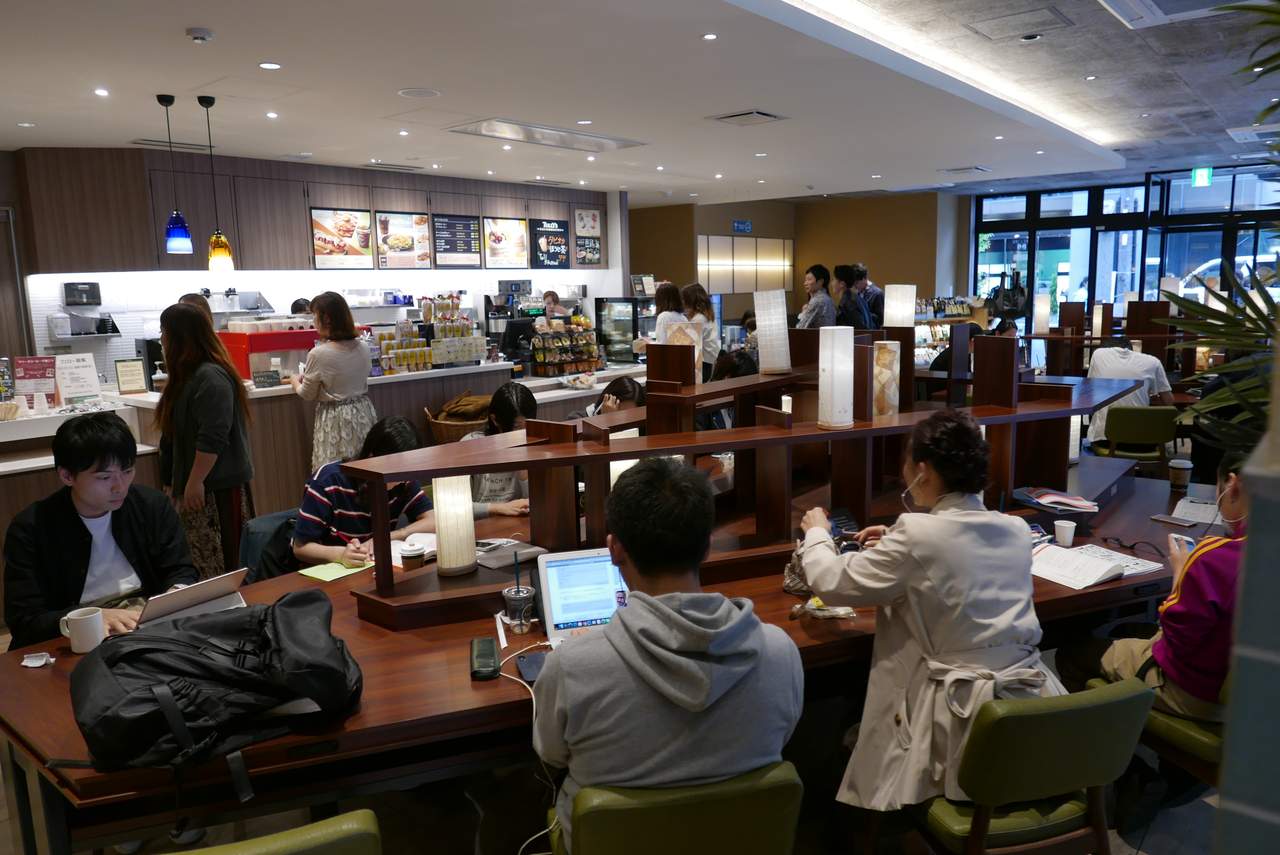 And finally, a little break at Tully’s coffee – the dominant local Starbucks clone, where people go to hang out, read, or do homework. Excellent coffee, relaxed mood, and good jazz music – I could basically live there…

Playing Jazz on the radio seems to be a thing, not just in Japan, but also e.g. in Singapore, wherever things are meant to seem high-class – and not just the kind of dumbed-down elevator Jazz, but some serious jams by the likes of Coltrane. Strange, but loving it.