Swayambunath was a name that I could not for the life of me remember – had lots of conversations like “What are you doing today” – ” Going to Saya..waya…the Buddhist stupa, you know, the one with the monkeys”.

Swayambunath is a major ancient buddhist site on the outskirts of Kathmandu. Besides the giant stupa with the all-seeing buddah eyes, there’s lots of smaller temples, including hindu sites of worship, on top of a hill.

The hill is famous for its long, steep climb (symbolizing the journey to nirvana – and also a lot of sweat, even in the slightly cooler evening). 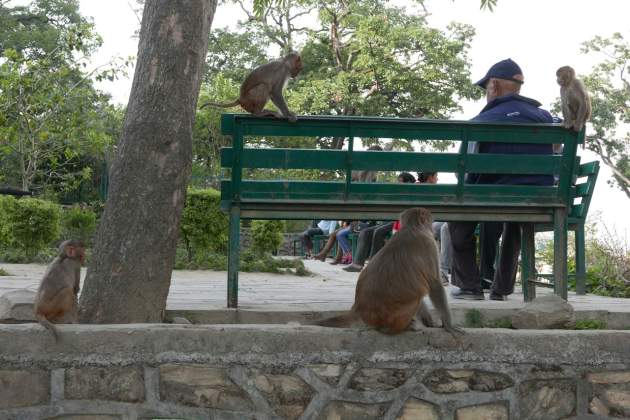 And also for the monkeys living on it – the real stars of the show for me. They are neither aggressive nor shy, just doing their own thing among the humans coming to visit.

Did I spend more time watching the monkeys then looking at the temples? Well, what if it’s both in the same picture?

Also famous: the view from the top of the hill. Here towards the Kathmandu valley, where the sheer size of the huge sprawl of Kathmandu becomes apparent.

The view towards the mountains was sadly rather non-existant, due to the hazy sky (weather or pollution? probably both).

This one is NOT my picture, but from wikipedia (attribution and link to original), just to show the view I had been hoping for. 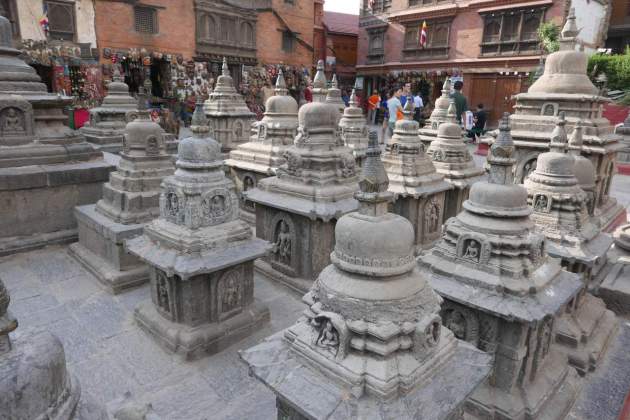 Plenty to see on the hill, though. Sadly, it’s not quite a mystical pilgrimmage site, but quite a circus full of the usual souvenir sellers, guides, touts, chinese tourists with selfie sticks etc. 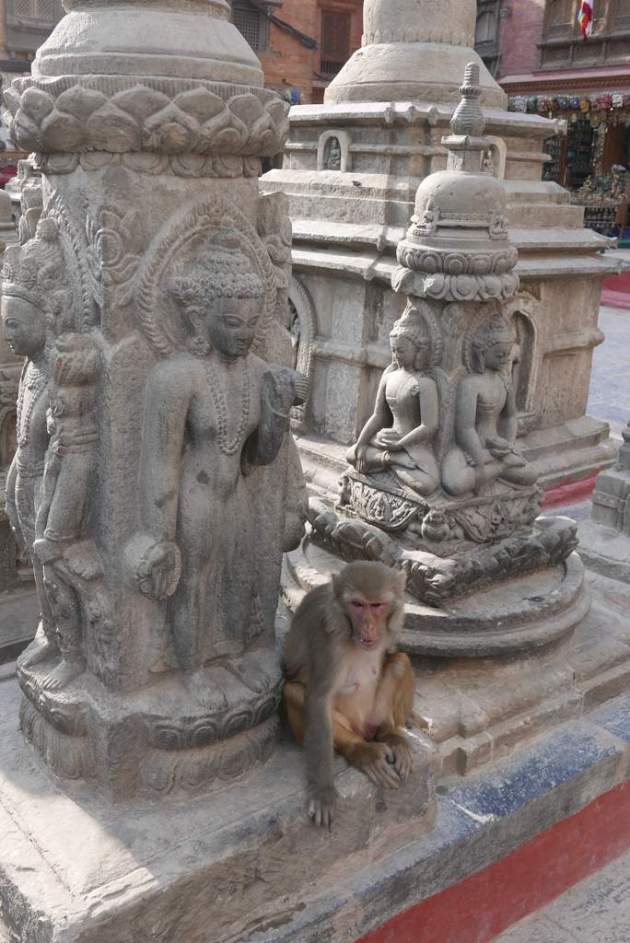 And monkeys, of course. Those are cool. 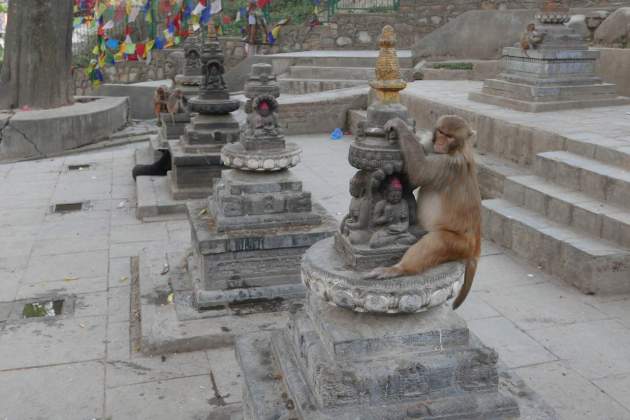 Did I mention the monkeys?

Alright, more temple views. Those are impressive, too.

Prayer mills are also very much a thing, with different sections responsible for different mantras when spun. The monks were happy to let me have a go at the prayer mills – a preayer’s a prayer, right? Though when walking around the temple, you have to do it clockwise, otherwise the blessing does not work, according to the tibetan style of buddhism.

Some more modern statues at the base of the hill.

Some more shrines. Although to get the real impression, note the bluetooth speaker placed on the shrine in the foreground by the souvenir seller next to it, blasting some finest Bollywood soundtracks. Fit the scene, though.

On the way back downtown. Hey, why don’t you just walk, whispered google maps seductively. It will be a nice stroll along the beautiful riverside, it promised. Eugh. Picture is not even complete without the lovely smell of garbage.

Not be unfair to Nepal, though, let’s finish today’s pictures with something prettier: random guy on the street selling fruit from his “cargo bike”. Advantage of coming to Nepal in the host season: Papaya and Mango are in season, and very, very tasty.