Some more pics from Kathmandu – this one is the entrance to the home of the Kumari – a child that is worshipped as a living goddess, showing herself here once a day, but only until she hits puberty, at which point a new, younger Kumari is chosen. Yup, Hinduism does get weird sometimes. 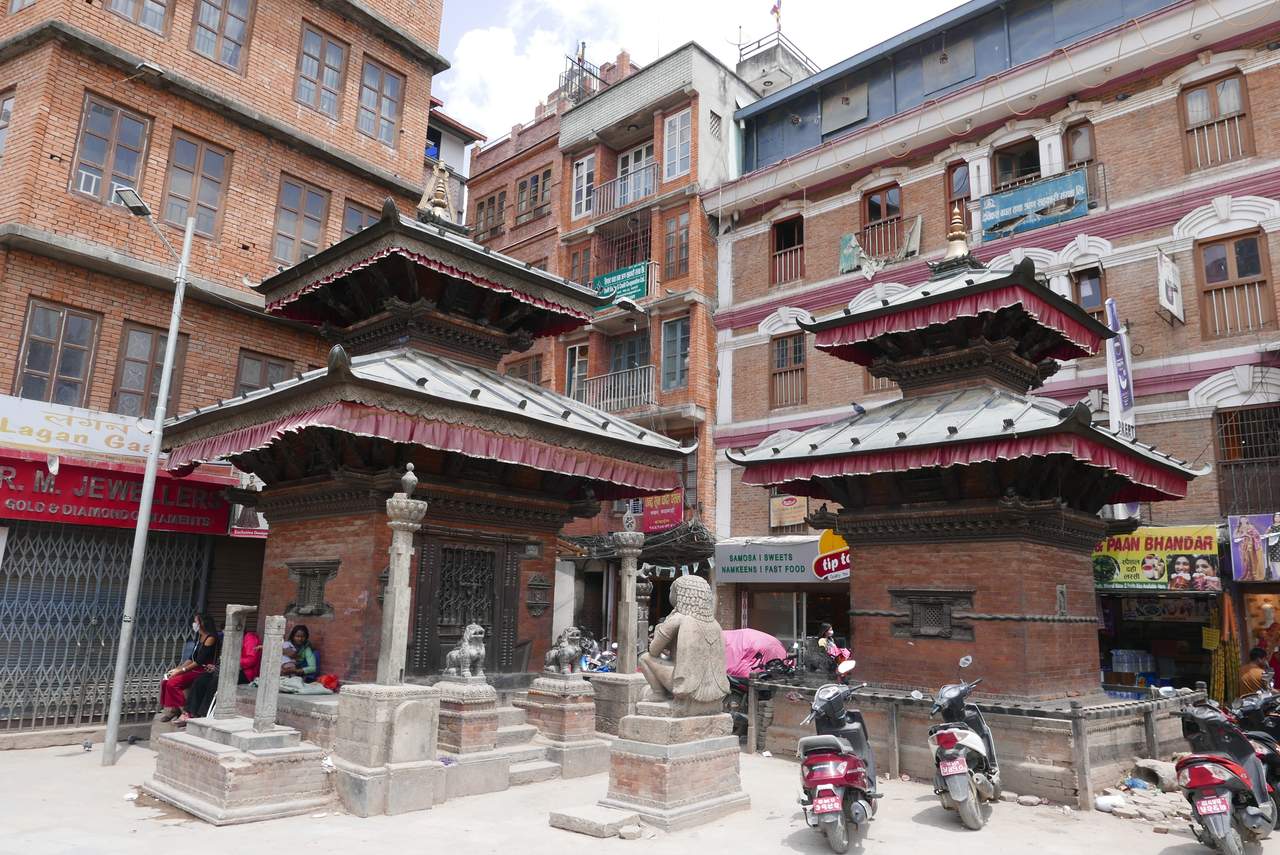 Kathmandu is full of small neighbourhood temples, shrines and statues – just being there, with some prasad (sacrificial donations of e.g. food), and some people praying, but otherwise just being part of daily life. I found those often much more interesting than the famous temples on e.g. durbar square.

Like this one, just hidden in a backyard of some side street.

Or this one I stumbled upon while getting lost.

Lots of statues and carvings everywhere. Some creepy demons, some sexual in nature, some weird. Certainly interesting, but I have to say that as artworks the buddhist-influenced imagery did not appeal to me as much as some other hindu styles. 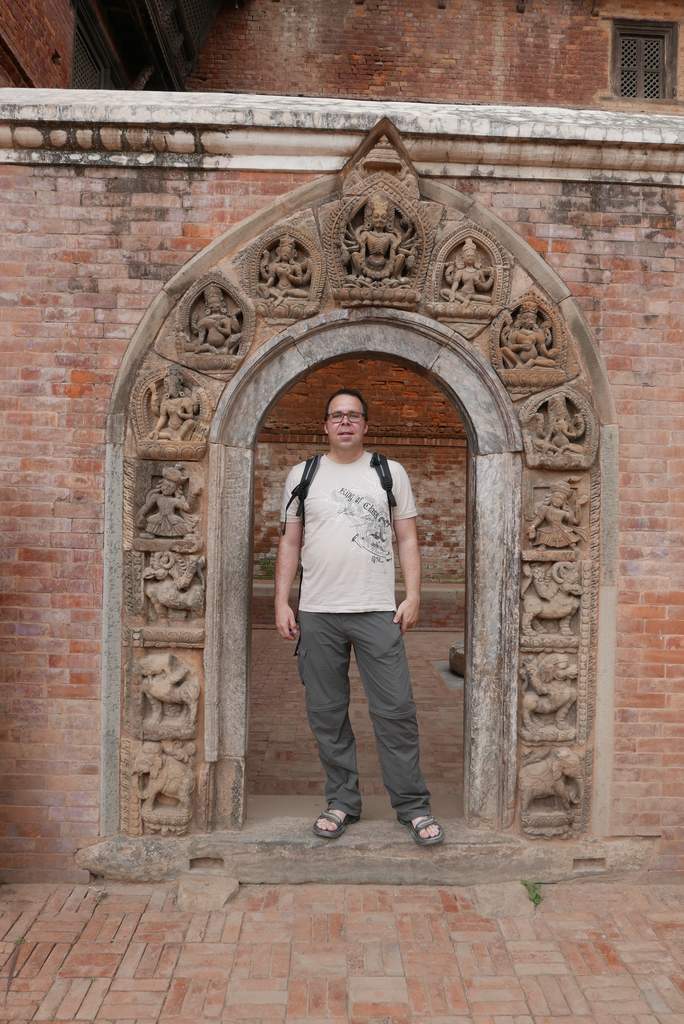 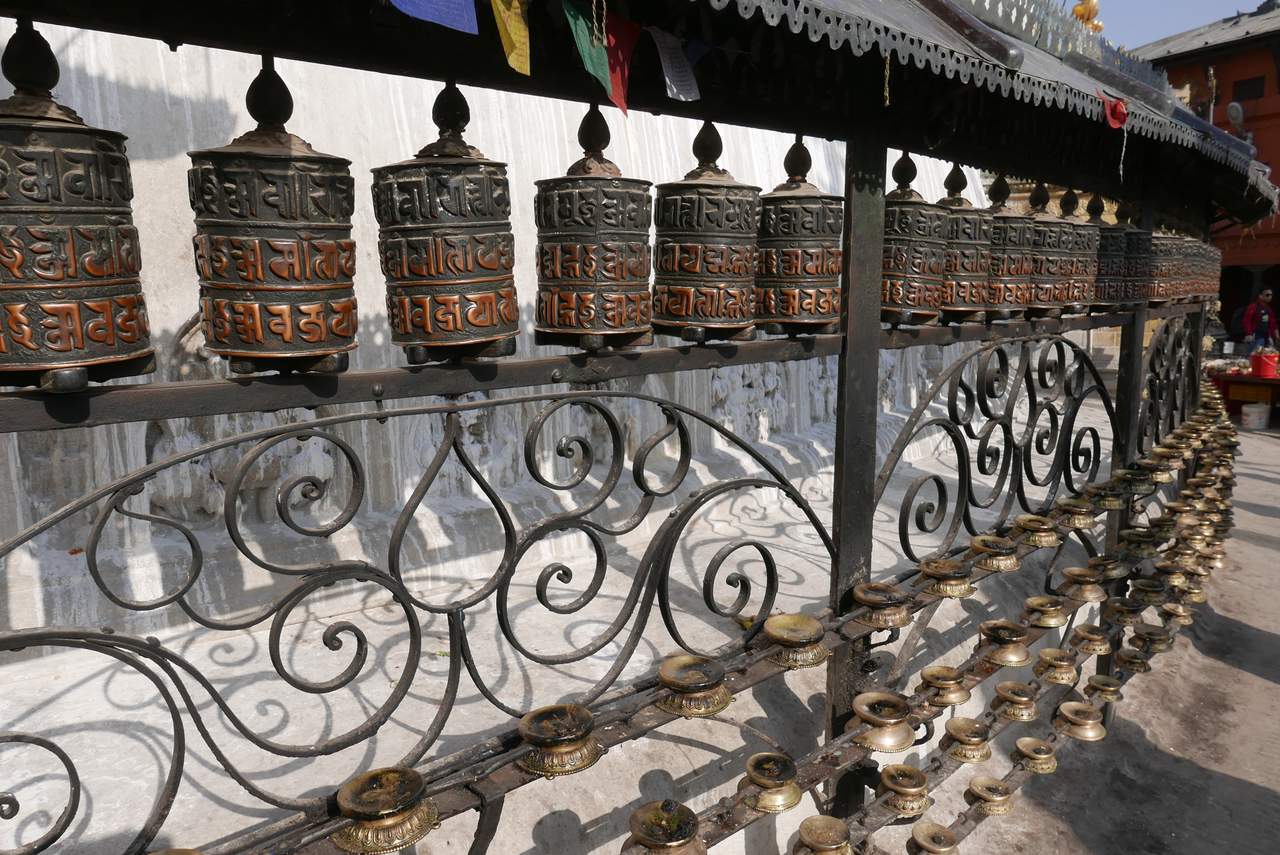 I prefer the plainer things, like those prayer mills. 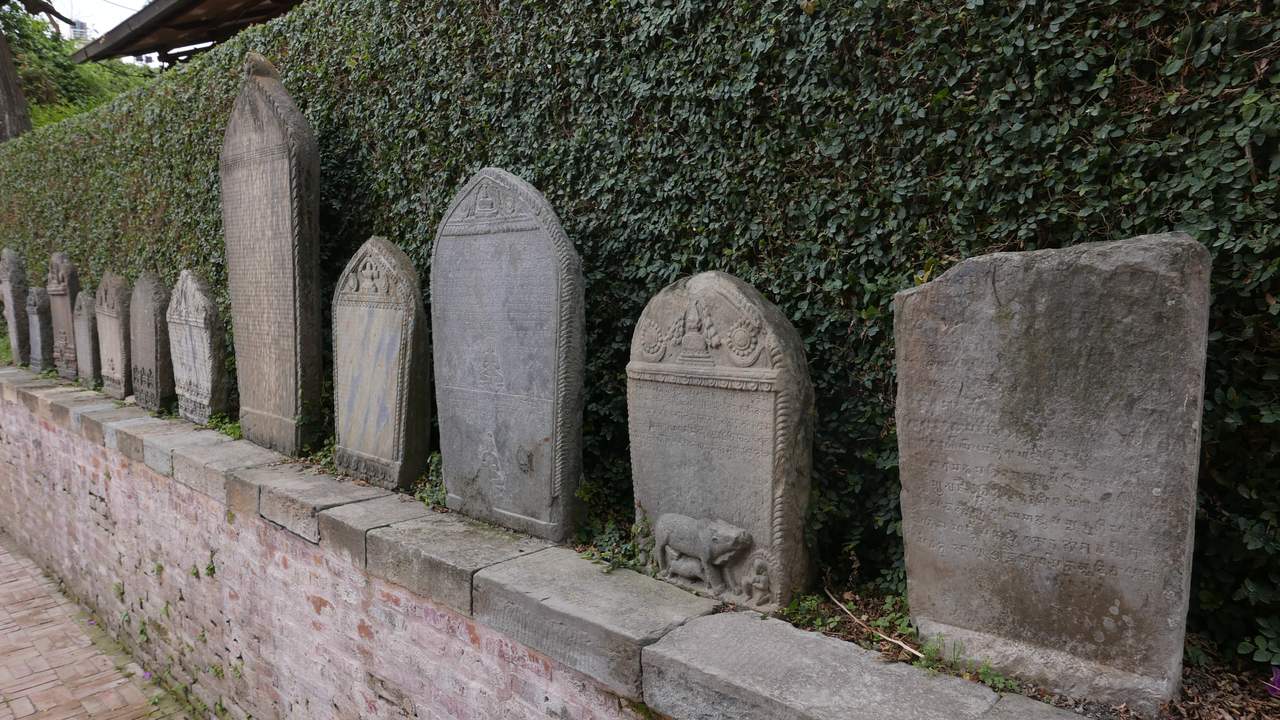 Or those beautifully carved ancient stones. These ones were in Patan, another former kingdom, nowadays more or less a suburb of Kathmandu, and just a cheap but hair-raising taxi ride away.

The palace has been restored, and now houses a fantastic museum of buddhist and hindu statues and other art and historic artifacts. I had a bit of an overload of statues with lots of arms and animal heads, though – which I say not to sound flippant, but rather because I was surprised and rather disappointed how much the tibetan style of buddhism had turned buddhism, which started not as a religion, but a life philosophy, into a “real” religion full of gods, saints and folklore.

So I’ll just post this picture of my favorite, much plainer, buddha, in the museum.

The inside of another buddhist temple and monastery in Patan. 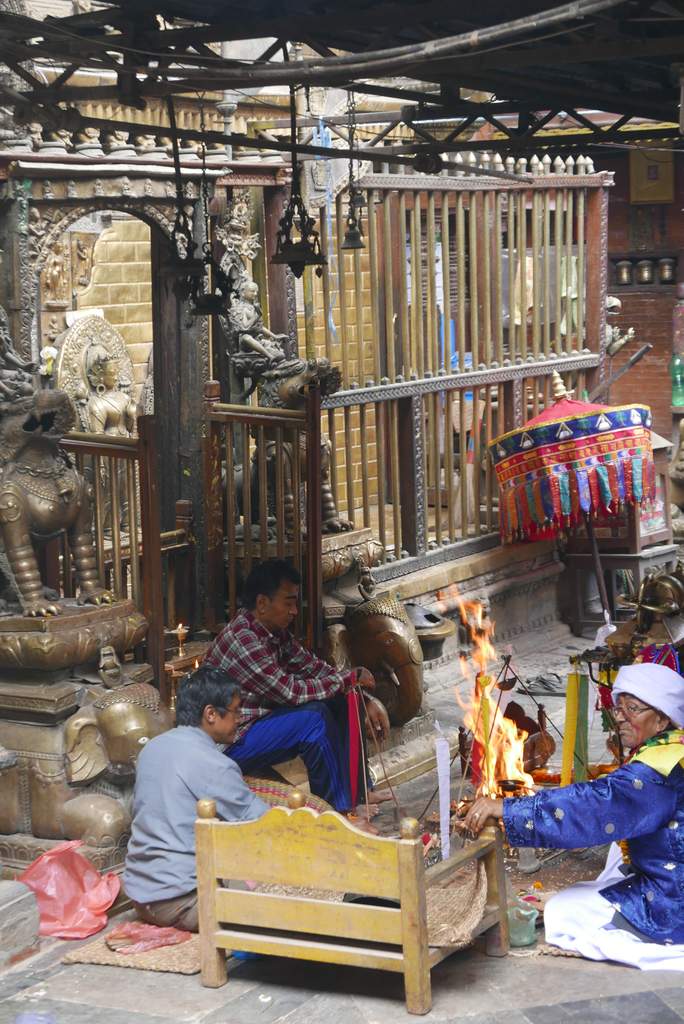 They did not speak enough English for me to get what the ongoing ritual was about, but did not mind having their picture taken.

On the way back to Kathmandu. Having google maps on the phone is absolutely fantastic when roaming around an unknown city (and internet access has so far worked in every country visited, and at expensive-but-ok prices), but sometimes the reality of “highway leading directly in your direction” and the reality, as in the picture above, does not quite match up.

Back in Kathmandu, I started to freak out when suddenly lots of soldiers, and policemen in riot gear, appeared – until I saw the sign above, and remembered that somebody had told me yesterday that India’s prime minister Modi was coming for a state visit. 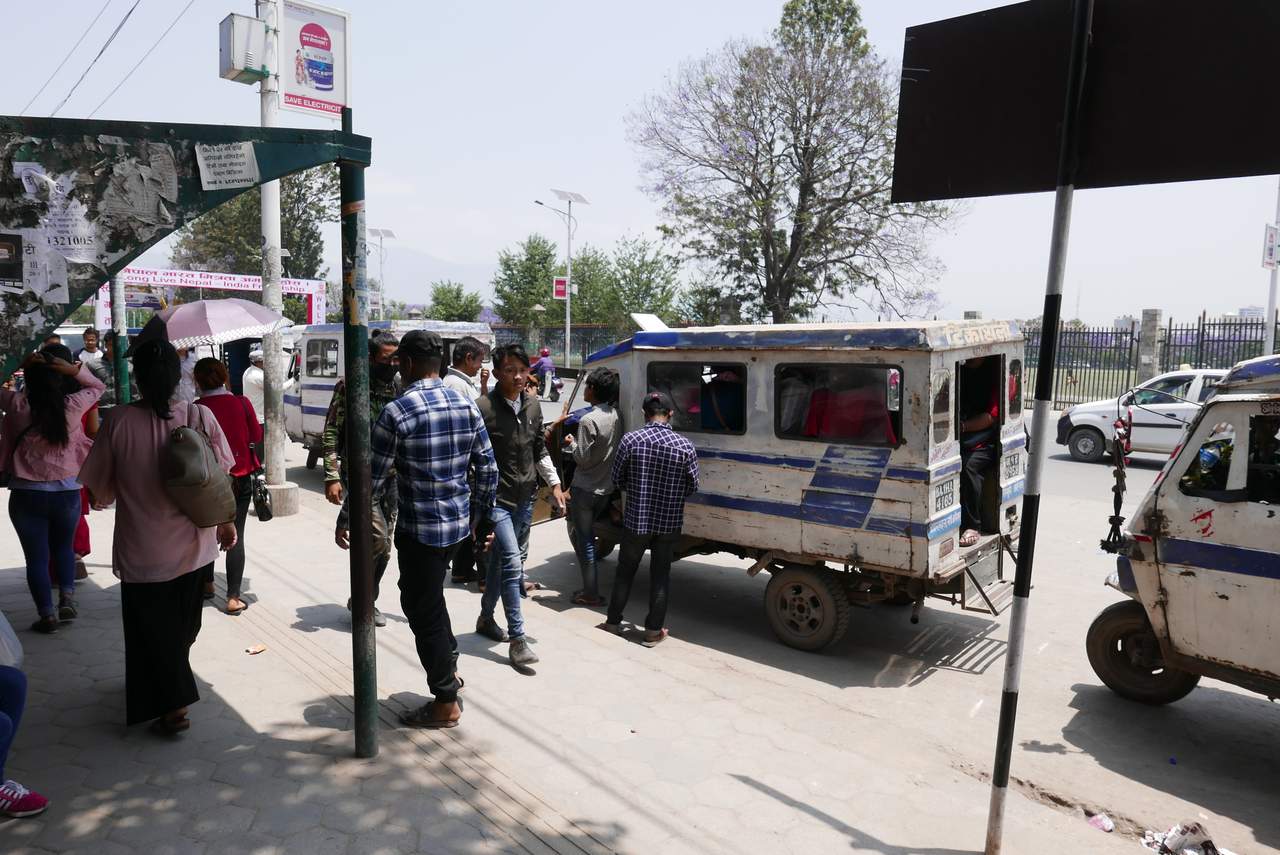 These vehicles are minibuses, that apparently have more or less fixed routes, and leave when full. Would have cost me 20 rupees or so to Patan instead of the 500 for a taxi, but since 500 rupees is about 4 euros, in this case I went for the less adventurous option.

And now for something completely different: The “garden of dreams”, a recently restored garden built by a rich aristocrat in the 19th century (I think), inspired by victorian English gardens. VERY beautiful, and an oasis of calm in the madness of downtown Kathmandu. 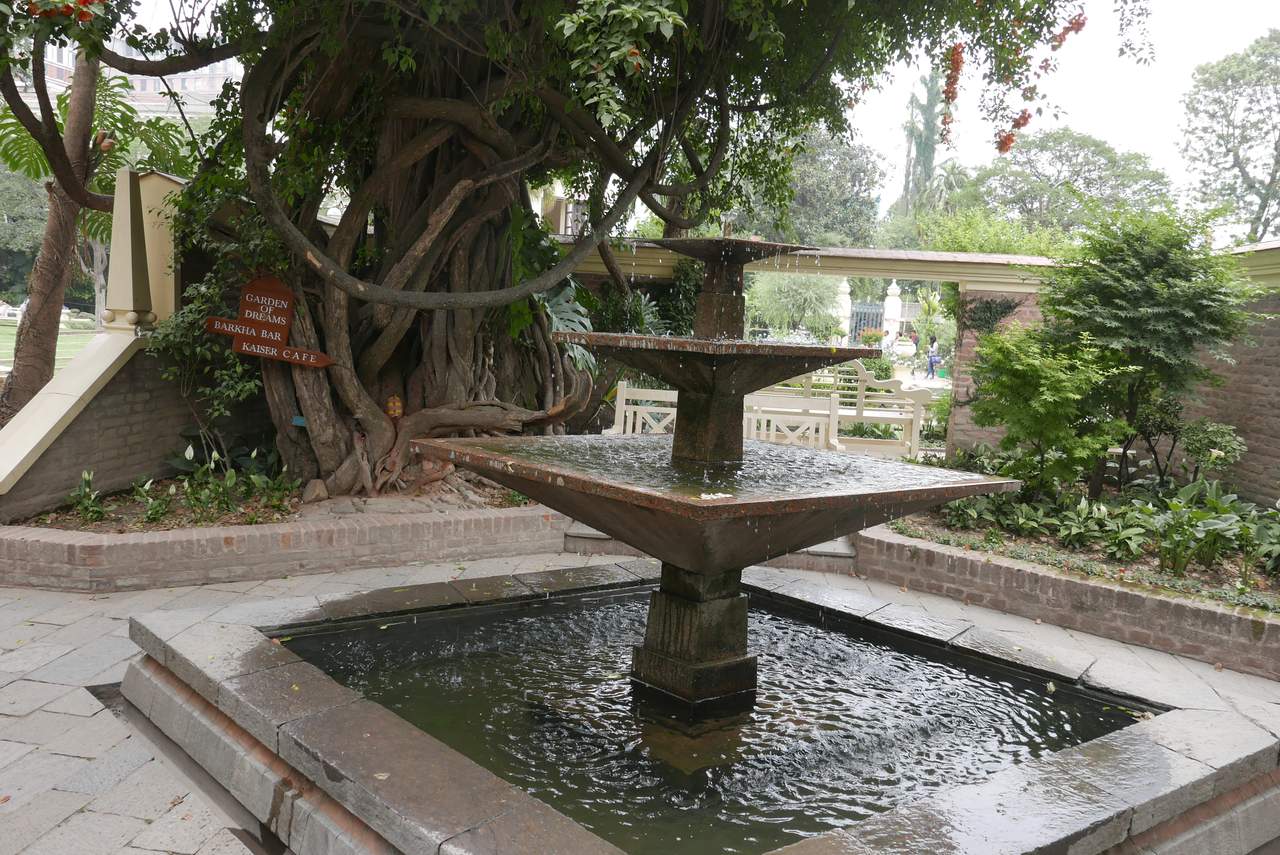 Made me realize that public spaces that are green, clean, safe and quiet is a true luxury of living in a rich country. Also, sometimes you just have to quit sightseeing and exploring for a while, and kick back, read and relax for a bit, which I did in this very spot.

That’s it from Nepal – next up: Singapore!