In the last few years, Abu Dhabi has apparently decided that they need to show that uppity young upstart Dubai that they, too, can play a giant game of Sim City, using a few billions of oil money here and there to see what crazy kinds of tourist attractions and luxury entertainment they can come up with – preferably on new, man-made islands (because there is not enough desert already?), and with at least a few “World’s biggest/fastest/highest/newest”. 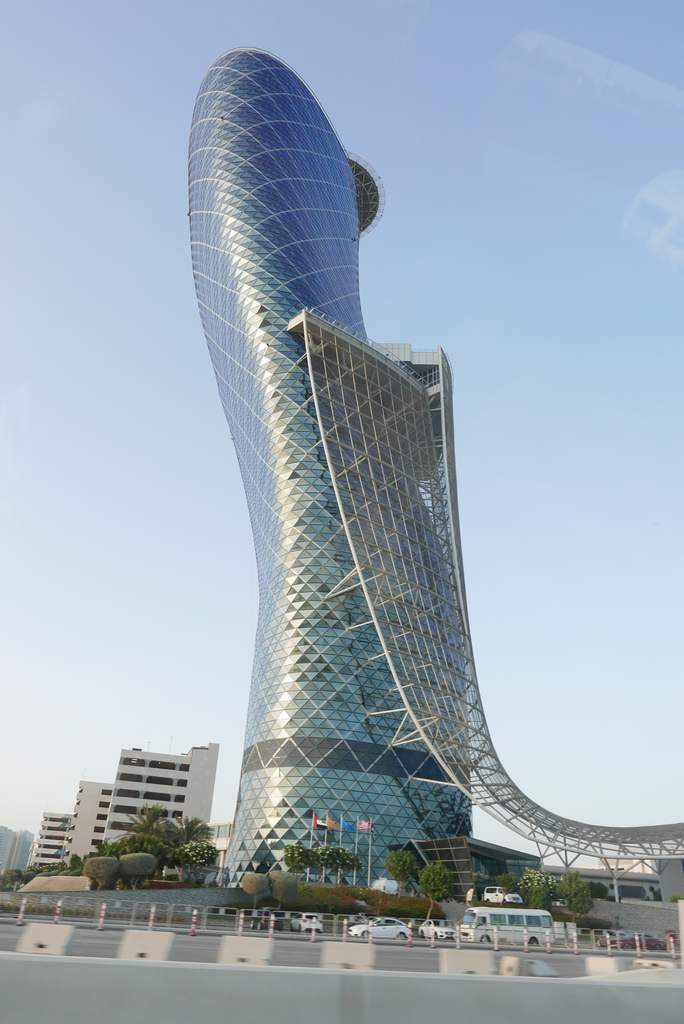 First up: the world’s most leaning tower in the form of an office/hotel building. Not sure why – it certainly does not HAVE to lean for any reason. But “world’s mostest” is alway good, right? 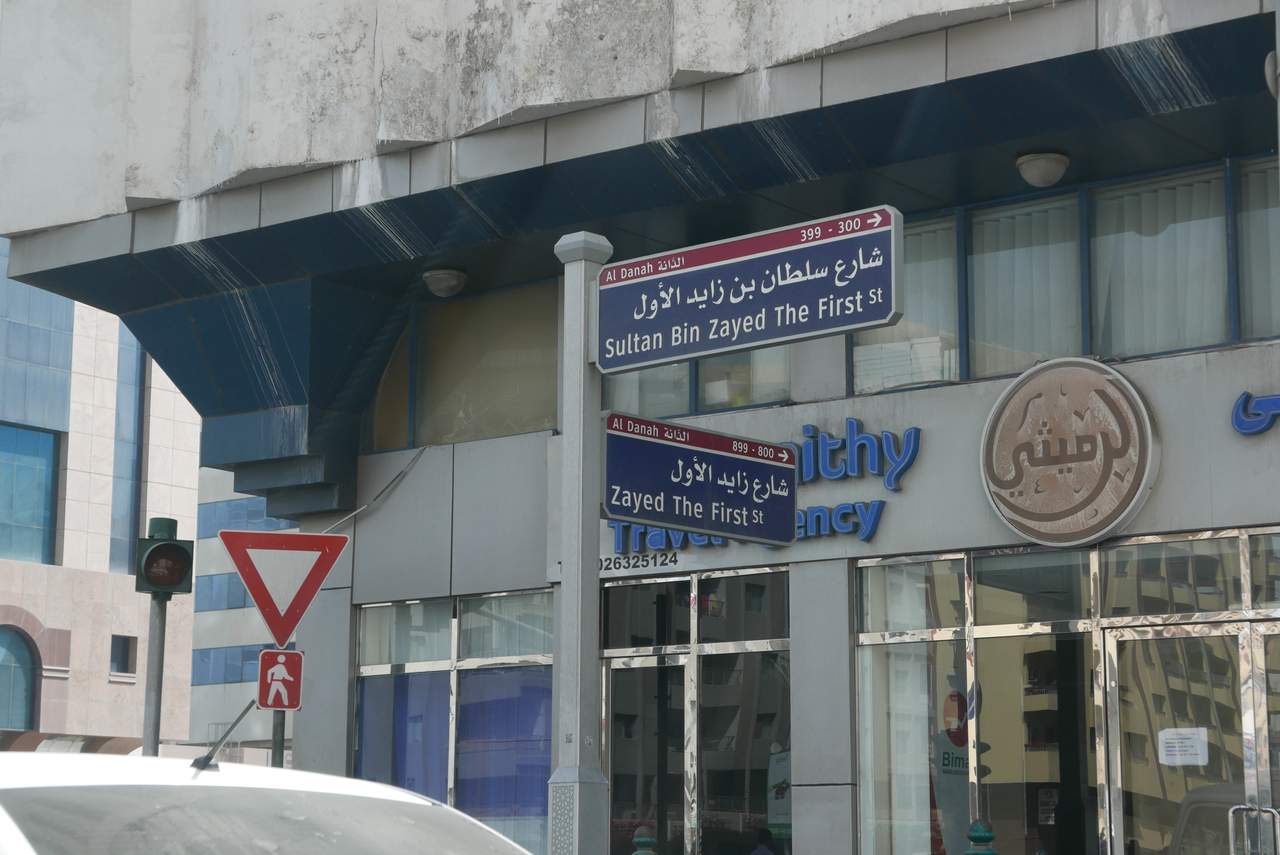 Personally, I would also add “most things named Zayed” (Zayed as in the founder of the emirate, and the U.A.E). “How to get to Zayed port? Just take Zayed bridge into the city, then continue along zayed road, and turn right after Zayed grand mosque.”

Most people, from my Indian taxi driver to the emirati guide at the mosque, seem genuinely cool with the political leadership, and lots of people come here from neighbouring countries because a democracy is quite low on your list of priorities  compared to “living in a place that’s safe, not completely shitty, and allows me to make a living”, and the U.A.E. does a much better job of that than, sadly, quite a lot of countries. But you should not forget that this is very much a “real” kingdom – not as in “a king as figurehead with some political power”, but  as in “the king literally owns the country, and can do whatever he wants”. For example censorship on the internet is very much a thing.

But now for today’s main event: 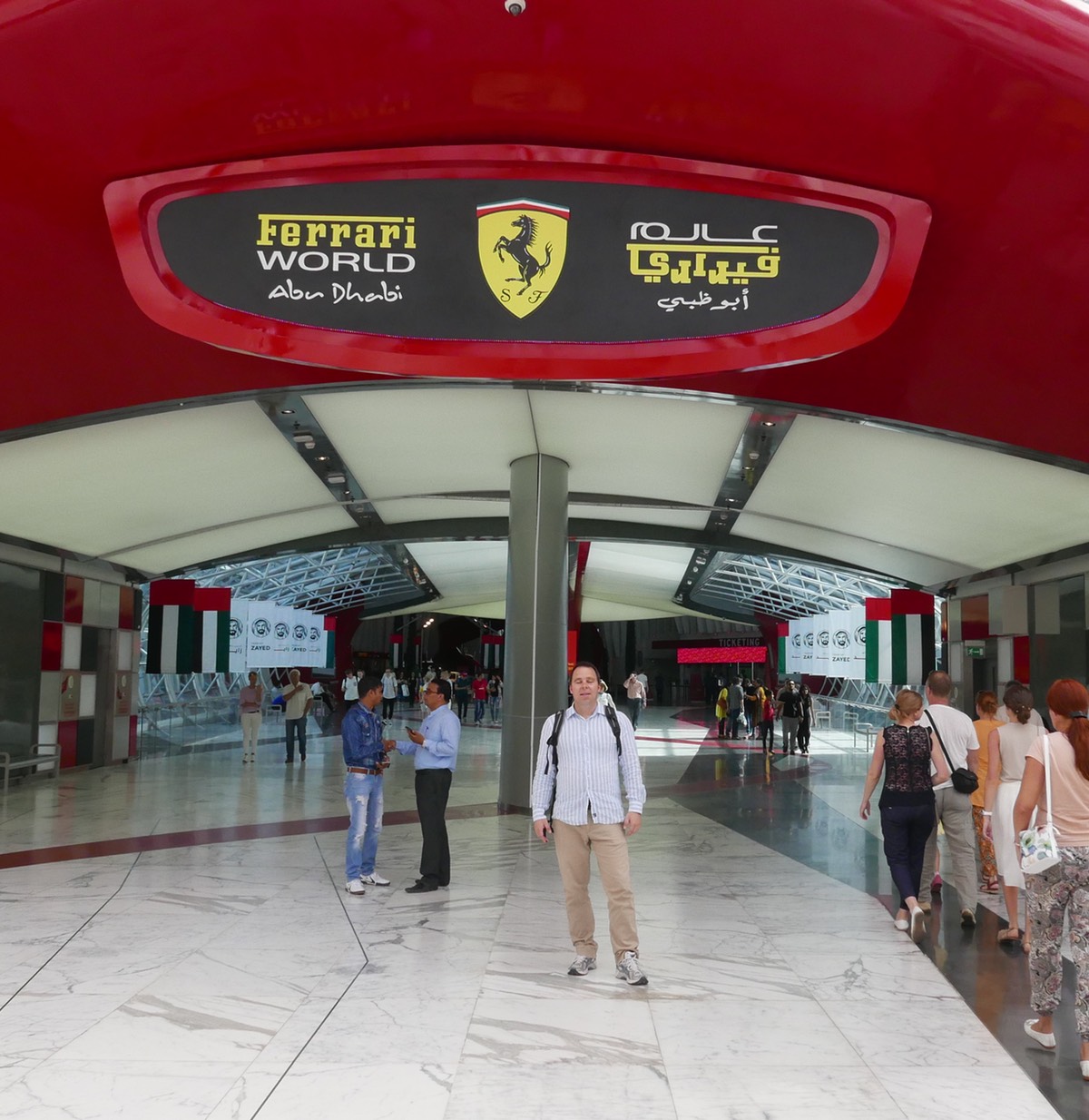 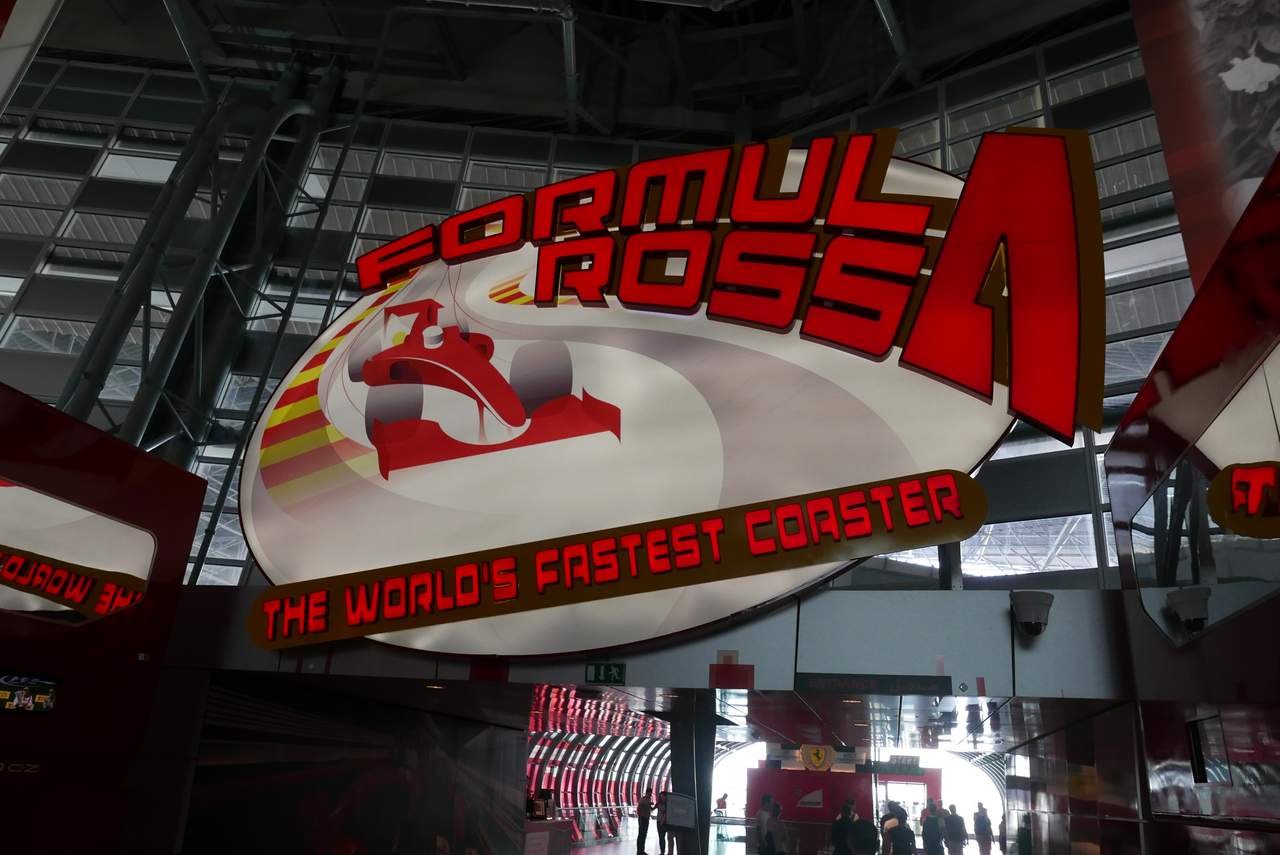 Goes to over 200 km/h in less in four seconds or so, by using technology similar to the steam catapults used to launch planes on aircraft carriers. 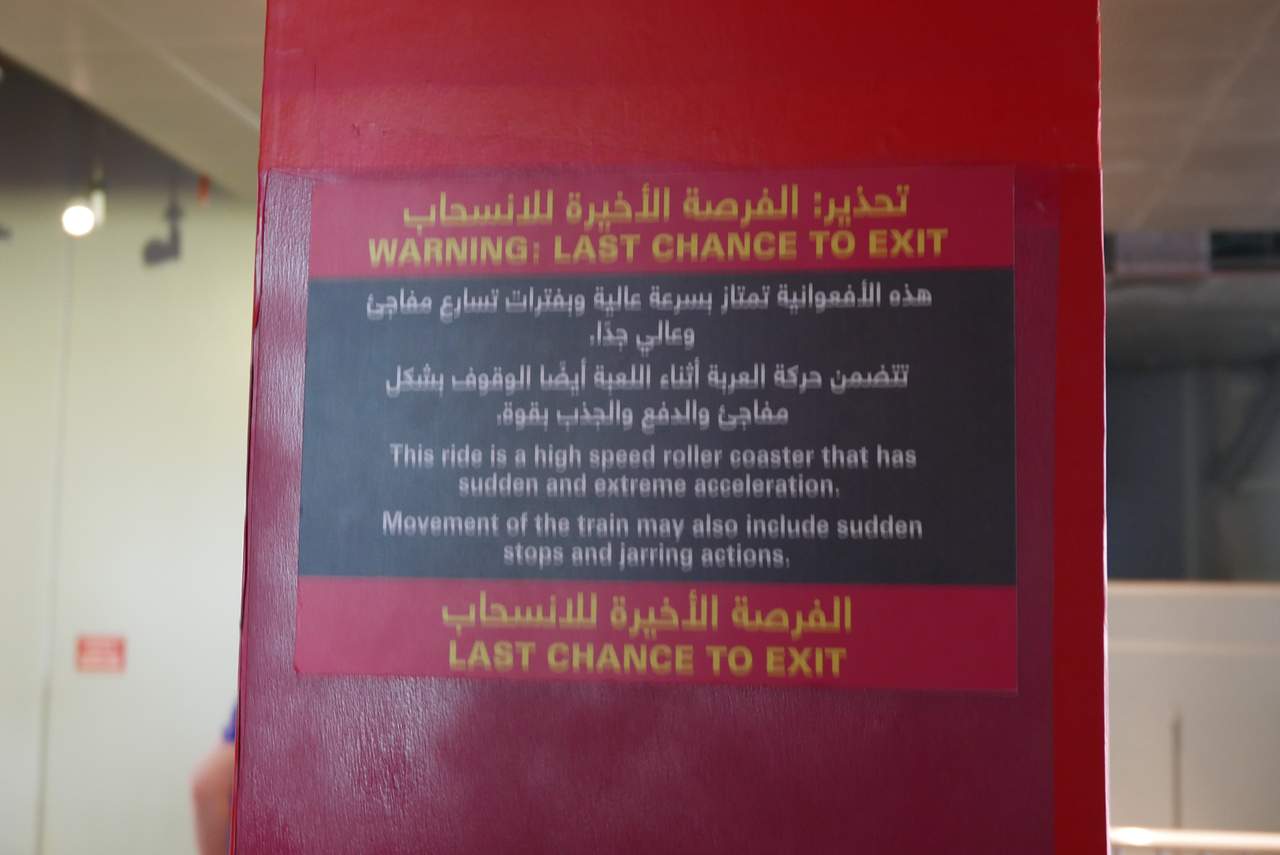 Not sure if that sign is necessary, or only exists so 15-year-old kids can feel all macho for riding this thing. Probably a little bit of both. They do make you empty your pockets before the ride (a cell phone leaving your pocket at 200 km/h becomes a projectile…), and make you wear plastic googles (so hitting an insect won’t hurt your eyes).

What does the ride look like? There is an observation platform to watch the coaster, but since it’s outside, it was way too hot even in the shade to stand there for minutes to take a video – but luckily there’s plenty of examples on youtube, like here:

Not sure if it’s worth the price of admission to the park (a rather steep 250 dirhams, i.e. almost 60 euros), but I have a soft spot for weird and extreme things, so yay!

What else is there in ferrari world? It’s a rather weird mix of a temple to the brand of ferrari (rather lost an me, but the cars exhibited do look cool), theme park rides (mostly other pretty wild rollercoasters), kid’s playground, and fake Italian disneyland. 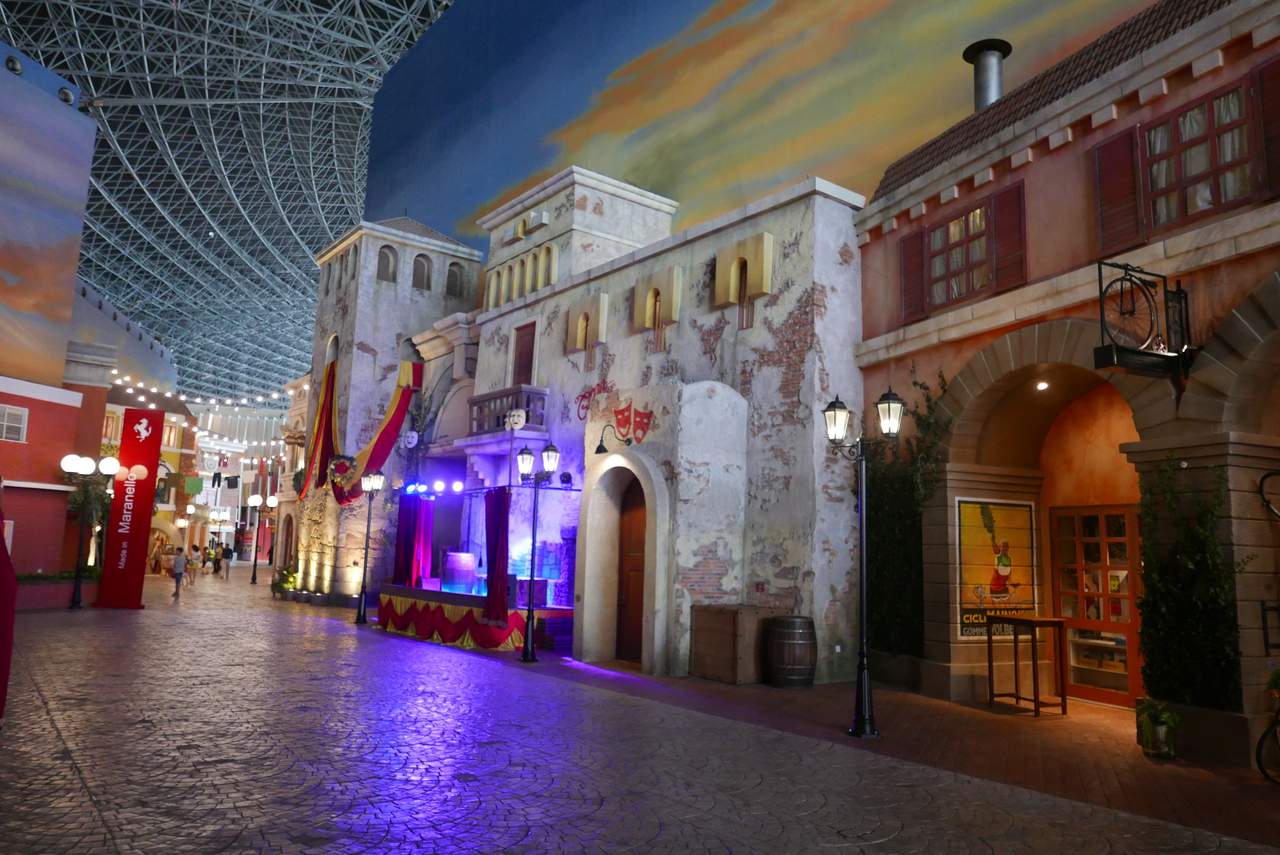 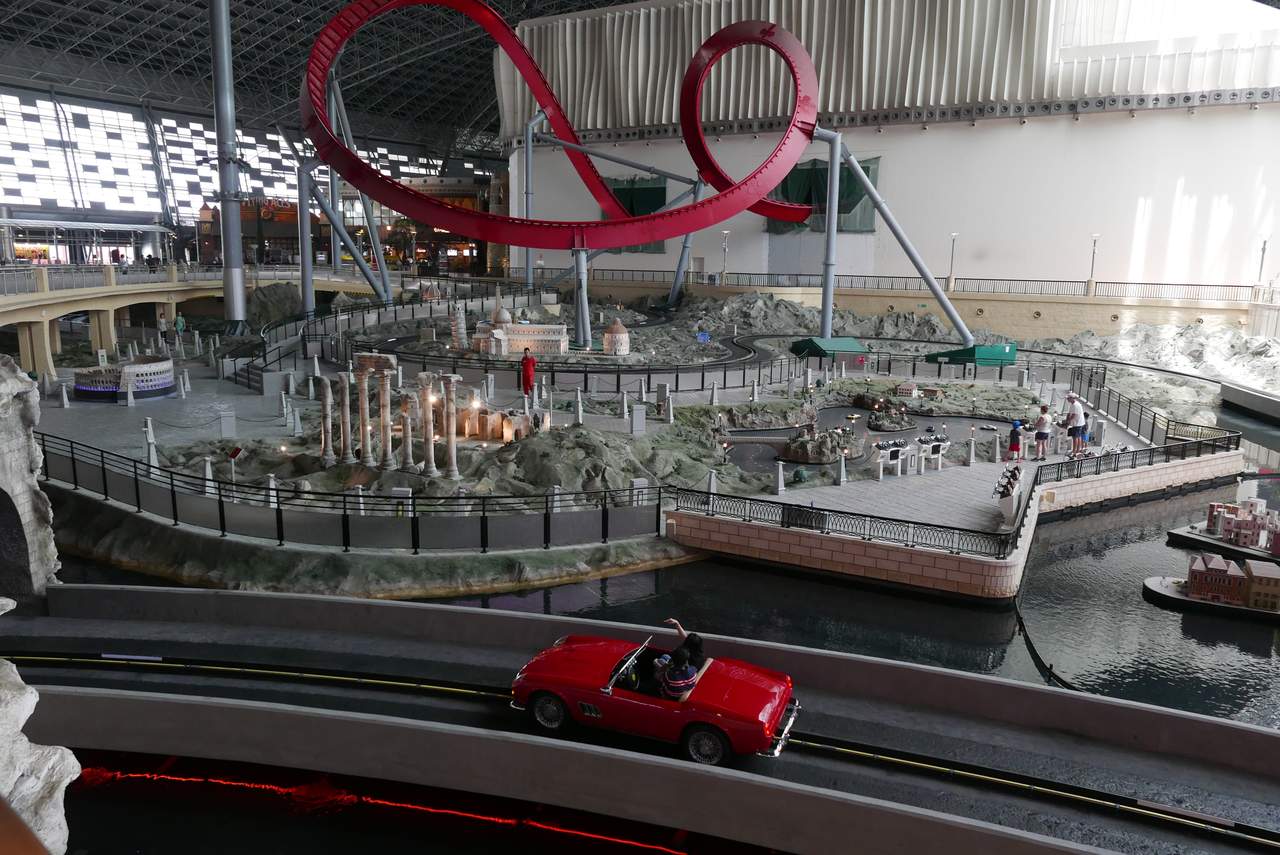 And you can e.g. ride a little red car through a landscape full of scale models of famous Italian landmarks. It’s not exactly Miniatur-Wunderland, but nicely done.

There were a fair number of people in the park – but few enough that I wonder if they can possibly recoup their investment. Oh, silly me, oil money, I forgot – it’s not about having a profitable theme park, it’s about having the most world’s mostest, i forgot.

The nice thing for me was that I could ride all the rides with no queues at all, so I could try every single rollercoaster and ride in a few hours. 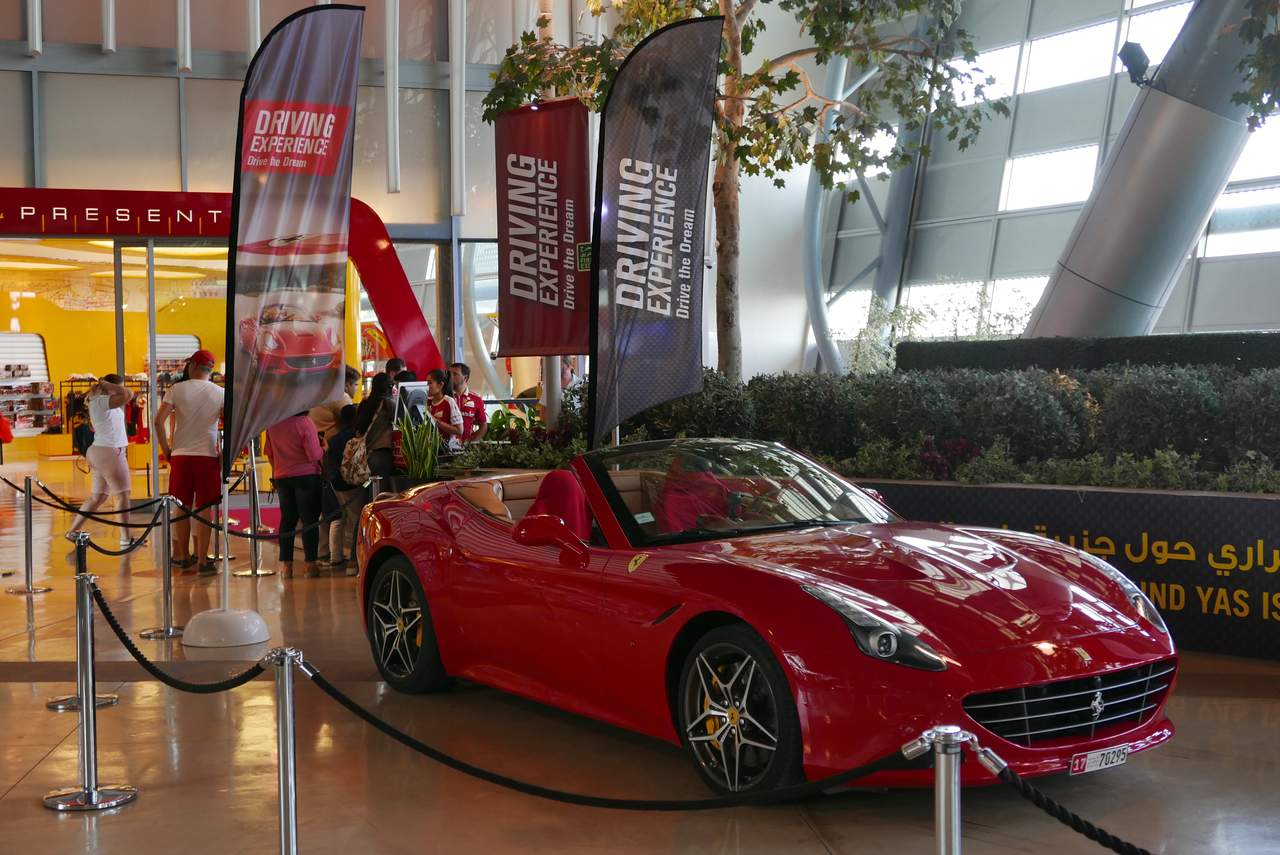 The one thing I did not do ist take the offer to take this real Ferrari for a spin around the island – it was, ahem, somewhat out of my price range.

Did I mention that the whole city feels like it’s working hard to find new ways to allow bored, rich people to spend their money?

On a more light-hearted note, I will leave you with one more video of one of the more thrilling rollercoasters:

Yup, I did ride that thing, too – but then felt accelerated, spund and thrown around enough that I decided to head to a rather quieter place, the Sheikh Zayed mosque. (post about that coming up).